This is an unbelievable feeling – I won Paris-Nice! And if that wasn't enough, I could defend the yellow jersey from the first stage on. I fulfilled a dream with this win.

A big thank you to my team! The guys always held me out of the wind, at times in extreme weather conditions. They controlled the race, especially in the last and next-to-last stages. That was really strong! The showdown on Saturday came on the final climb. We pretty much expected that. I felt good, but the last two kilometers were extremely hard. From the start I had planned to give everything I had. That is why I went all out, rode myself empty and am incredibly happy that it worked out.

And the support that you, my dear fans, gave me in the last few days is really incredible! You are the best! Yours, Maximilian. 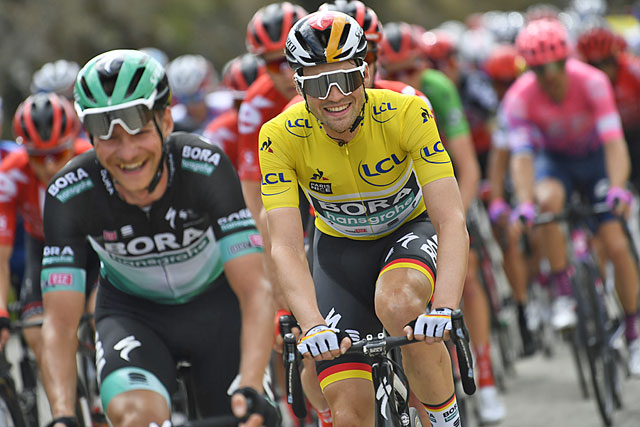 The Queen Stage today was not an easy one. It was 227 kilometers long and the last 100 kilometers were a really hard chase. The lead group was a strong one and the sprinter teams absolutely wanted a bunch sprint. Even if I wasn't a part of that, I am still in the yellow jersey after the fifth stage. Whether I will wear it again tomorrow doesn't depend on the challenging stage...

Still in the yellow jersey

The team put on a super performance today in the second stage of Paris-Nice. Almost all our guys were up front. It was almost enough for Pascal to take the stage win, and as eighth I defended the yellow jersey. It can hardly go better. But the race is really hard. Until kilometer 120 it was extremely cold. I had thought it would get warmer and not rain so much.

Wow, I am super happy that I could win the first stage of Paris-Nice today! My team supported me like crazy. That gives confidence for the coming days, not just for me but also for the whole team. The first stage was, as expected, very hectic and stressful. The wind and the forecasted rain needed our full attention for every one of the 154 km.

A change of plans after races in Italy cancelled

Actually I wanted to be at the start of the Strade Bianche in Tuscany today, but instead I am now in Paris. Because of the development of the Corona virus, all upcoming races including Strade Bianche and Tirreno-Adriatico have been cancelled or postponed. But Paris-Nice should take place as planned, with stringent hygienic procedures.

Read more: A change of plans after races in Italy cancelled