Light and shadows at the World Championships

After a turbulent World Championship road race, I am now again in Berlin. On the way home from the airport, I at first took the wrong bus. Somehow that fits in with the lat few days, in which not everything went so well. I still especially had Sunday’s race in my head, which probably explains the wrong bus ;-)

I had to fight with my chain twice. First it fell off, so that I had to stop and put it back on. And that on the climb. You can imagine how much fun it is to then to try and catch up again. Not to mention the strength that you use up. The second time the chain wrapped around the derailleur, so that I could no longer use it. So I had to change bikes and ride back into the field again. Even though on this profile I would probably not have finished up front, I would like to have known where I stand compared to others in a World Championships under normal conditions.

Of course I got the gold medal in the team time trial with the guys and was really happy about it, but I would have been even happier if I had finished higher than 11th in the individual time trial. Top eight would have been even better. But I think I rode a good race. The values were right, my position was good. Maybe the outside circumstances or some other factor played a role. I must still analyze it.

All in all, I gathered a lot of experience. And one must say, after all, it was my first Elite World Championships. And I started in three races.

So that next time I can go home more satisfied, I will just have to come back again. I am already excited about the next Worlds.

But my season isn’t over yet. Next week I am off to China again. 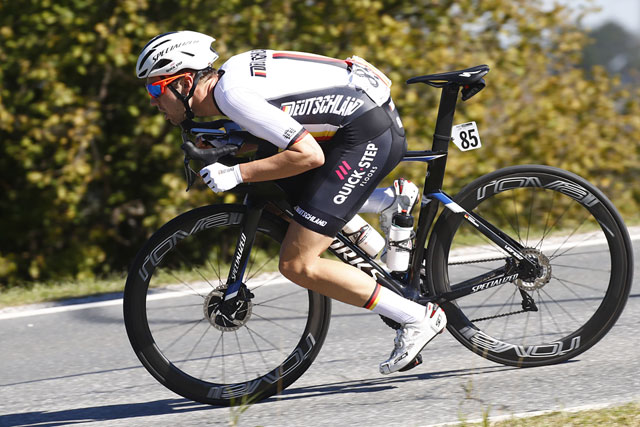